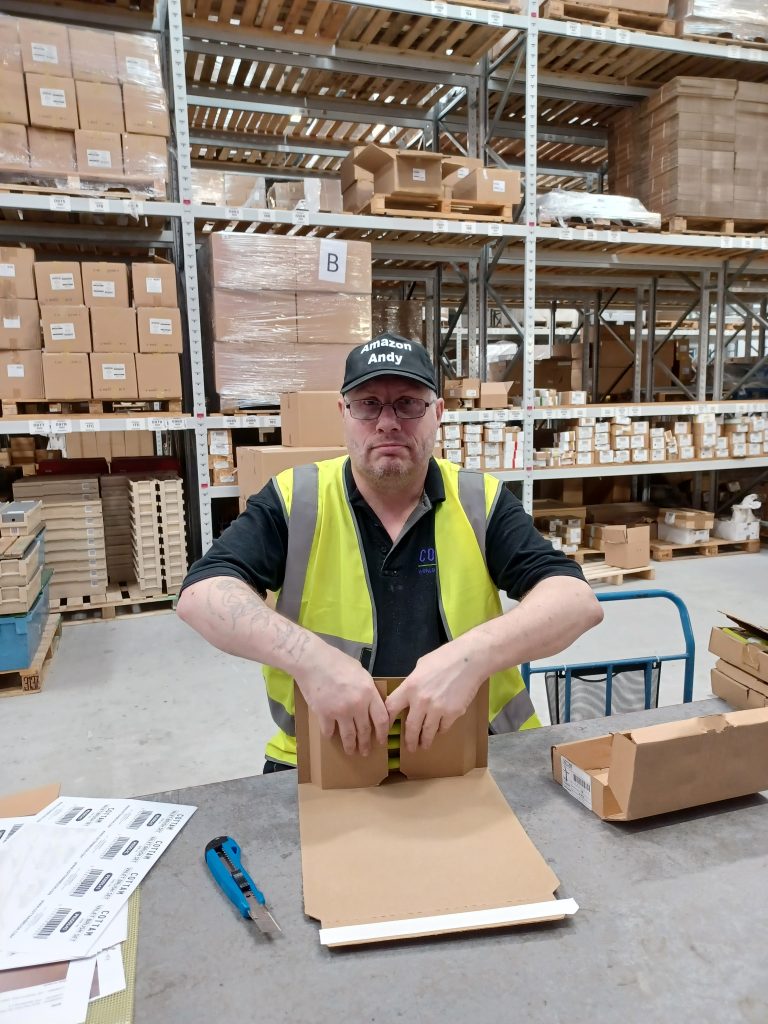 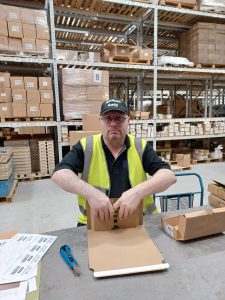 In our first ‘Meet the Team’ blog, we’re introducing Andy Yates, who recently celebrated his 25th anniversary working at Cottam…

When I first started at Cottam I was just helping out with cleaning and sweeping up. As the years went on I’ve progressed, and I now help with shot blasting, gluing and dipping. My main role though is picking and packing our Amazon orders – and that’s why my colleagues now call me “Amazon Andy!”

It’s the people. If you work with a good team, that’s what makes you want to come to work every day.

Also the chance to improve my skills. I completed training to use the forklift and I knew that management were proud of me for doing that.

The Christmas parties! But also, I was given the opportunity to go to the McLaren factory when they were launching some paint brushes we had created for them. I was proud to go and represent the company. We met some amazing people and were given a tour of the factory; then at the end we were given a gift box which included a photo of the Cottam team in the McLaren factory, as well as one of the brushes we’d made.

When I was little, I used to play with toy soldiers and I always wanted to be in the army.

I like going to football matches. I’m a big Sunderland fan. As a reward for my 25 years with the company they bought me a season ticket for next season – I can’t wait to go and support them.

My favourite place I’ve ever travelled was Egypt. It was a new experience for me, as the only other place I’ve been abroad is France. It was really sunny and the people were really friendly, they treat you very well.

I would like to be super speedy so I could get all my jobs done quicker!

Send us your requirements

We use cookies on our website to give you the most relevant experience by remembering your preferences and repeat visits. By clicking “Accept All”, you consent to the use of ALL the cookies. However, you may visit "Cookie Settings" to provide a controlled consent.
Cookie SettingsAccept All
Manage consent

This website uses cookies to improve your experience while you navigate through the website. Out of these, the cookies that are categorized as necessary are stored on your browser as they are essential for the working of basic functionalities of the website. We also use third-party cookies that help us analyze and understand how you use this website. These cookies will be stored in your browser only with your consent. You also have the option to opt-out of these cookies. But opting out of some of these cookies may affect your browsing experience.
Necessary Always Enabled
Necessary cookies are absolutely essential for the website to function properly. These cookies ensure basic functionalities and security features of the website, anonymously.
Functional
Functional cookies help to perform certain functionalities like sharing the content of the website on social media platforms, collect feedbacks, and other third-party features.
Performance
Performance cookies are used to understand and analyze the key performance indexes of the website which helps in delivering a better user experience for the visitors.
Analytics
Analytical cookies are used to understand how visitors interact with the website. These cookies help provide information on metrics the number of visitors, bounce rate, traffic source, etc.
Advertisement
Advertisement cookies are used to provide visitors with relevant ads and marketing campaigns. These cookies track visitors across websites and collect information to provide customized ads.
Others
Other uncategorized cookies are those that are being analyzed and have not been classified into a category as yet.
SAVE & ACCEPT