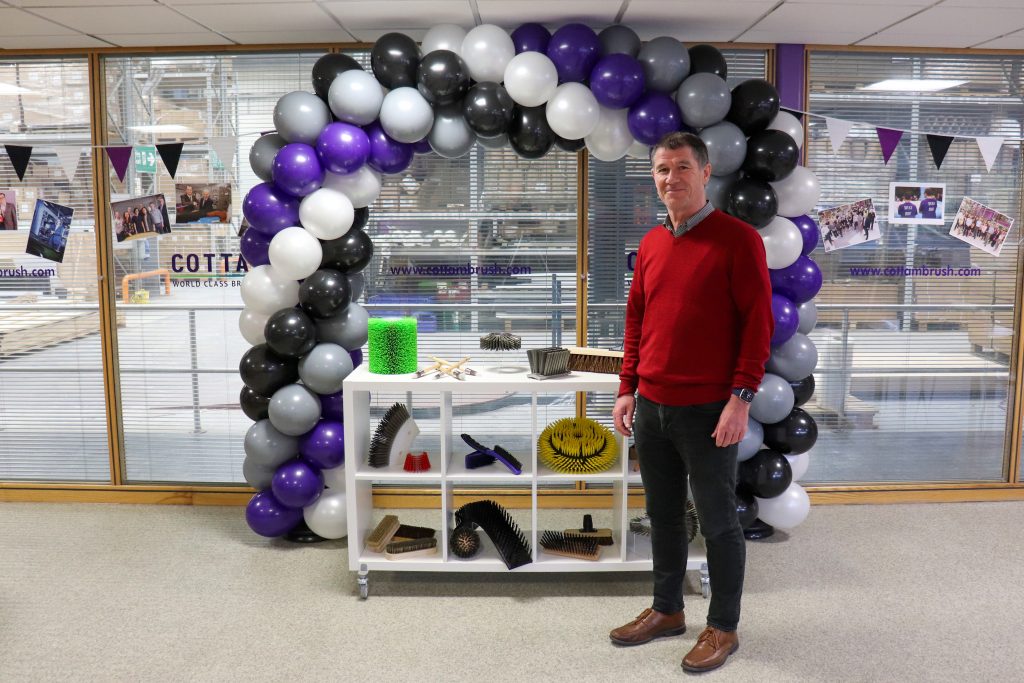 Alan has worked at Cottam for over 20 years, and in March this year was promoted to Managing Director…

As the Managing Director my role is to support the leadership team to implement our business plan.

My favourite thing is the people I work with. Our team are committed, loyal, and they want the company to be successful.

Something that stands out was leading the move from our old Sunderland site to our (then brand new) Hebburn site. I was responsible for planning the move, which was a challenging but enjoyable job.

When we moved to Hebburn we had an open day and invited our suppliers, customers and other stakeholders including people from the local council. David Miliband, who was a government minister and MP for South Shields at the time, visited as part of the open day and made a brush with our engineer, Eddie. The open day provided us with some good exposure and helped to introduce us to the South Tyneside business community.

Also, I am the first Managing Director at Cottam Brush who’s not a Cottam family member. This is a big responsibility but I’m very proud to lead the company.

When I served my time as an engineering apprentice I tried different trades as part of the apprenticeship such as machining, welding, and electrical. I wanted to do electrical engineering but the company where I worked at the time wanted me to go into fitting and turning.

My dream job, though, would be to be manager of Sunderland AFC (although I probably wouldn’t last long!

I like watching football and spending time with my four grandchildren.

My biggest achievement would be getting my MBA at age 50. I set myself a goal to do a degree by the time I was 50 and I did it!

I would also say having two jobs that have each lasted over 20 years. I’ve been at Cottam for over 21 years, which I think is quite rare nowadays.

I think that would be Bermuda. It’s a relaxed place to be and I found it laid back and friendly.

I would like to have teleportation – if I had needed to go to America, I could just be there.

Send us your requirements

We use cookies on our website to give you the most relevant experience by remembering your preferences and repeat visits. By clicking “Accept All”, you consent to the use of ALL the cookies. However, you may visit "Cookie Settings" to provide a controlled consent.
Cookie SettingsAccept All
Manage consent

This website uses cookies to improve your experience while you navigate through the website. Out of these, the cookies that are categorized as necessary are stored on your browser as they are essential for the working of basic functionalities of the website. We also use third-party cookies that help us analyze and understand how you use this website. These cookies will be stored in your browser only with your consent. You also have the option to opt-out of these cookies. But opting out of some of these cookies may affect your browsing experience.
Necessary Always Enabled
Necessary cookies are absolutely essential for the website to function properly. These cookies ensure basic functionalities and security features of the website, anonymously.
Functional
Functional cookies help to perform certain functionalities like sharing the content of the website on social media platforms, collect feedbacks, and other third-party features.
Performance
Performance cookies are used to understand and analyze the key performance indexes of the website which helps in delivering a better user experience for the visitors.
Analytics
Analytical cookies are used to understand how visitors interact with the website. These cookies help provide information on metrics the number of visitors, bounce rate, traffic source, etc.
Advertisement
Advertisement cookies are used to provide visitors with relevant ads and marketing campaigns. These cookies track visitors across websites and collect information to provide customized ads.
Others
Other uncategorized cookies are those that are being analyzed and have not been classified into a category as yet.
SAVE & ACCEPT